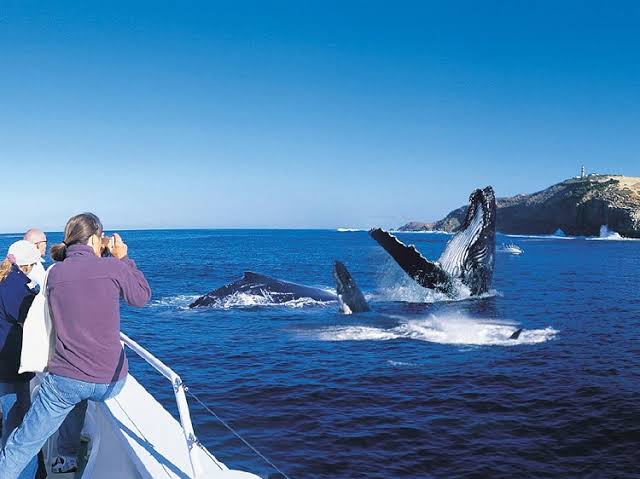 From May to August, the Humpback whales travel through Sydney on their way to the Great Barrier Reef where they breed and have their calves. Seeing these majestic creatures in their natural habitat is a once in a lifetime experience. Whales are the largest marine mammals out there, and they are fascinating to observe.

When you go on a whale watching tour, there will be whale spotters who look for the whales. Once they are spotted, you will be able to watch them in their own natural habitat. The whales live underwater, but they come to the surface every five to twenty minutes to breathe. In fact, you may even see one poke its head up and look around. This is called a spy hop, and it is believed that the whale raises its head up to see what is above the surface.

Another fascinating aspect of whales is their behaviours. Whales slap the water’s surface with their fins or their tales, which is thought to be a form of communication between whales. They sometimes do this to get rid of parasites that are clinging to their bodies. Another amazing spectacle is the breach. This occurs when a whale leaps up out of the water and slams back down. People go whale watching to see these amazing mammals in action out in the ocean.

Other Whales and Marine Life

When you go Sydney whale watching, you may see other marine life as well. Australia’s waters are home to over fifty percent of the world’s whale and dolphin population, including 45 different species of these creatures. You may be lucky enough to see orcas, dolphins, sea turtles, or Australian fur seals while you are out on the boat. There are many different fascinating creatures in Australia’s waters, even though the Humpback whale migration is the number one attraction to see.

Pass Australian Landmarks on the Way

When you go out to see the Humpback whales, you will pass many famous landmarks in Sydney, such as Luna Park, the Harbour Bridge, the Sydney Opera House, Fort Denison, and more. The views are spectacular, and it is healthy to be out on the ocean. The fact that you can go whale watching and see Sydney from the harbour at the same time provides you with an incredible experience that you will never forget.

The Humpback whales are amazing to see in their natural environment, and if you have an opportunity, you should go see them. These whales are known for their acrobatic moves, and it is likely that you will witness them in action. Whether they flip their tails or fins or completely hurl themselves out of the ocean, it is definitely something you don’t want to miss.

Visiting Sukhumvit Is Even Better with the Right Hotel

Why School Travel Needs To Be An Important Part Of The School Curriculum.

Finding The Best Apartment In Sathorn For You & Your…

Deciding Which of Thailand’s Beautiful Islands to Visit on…

Spoiling Yourself Rotten When On Holiday In Beautiful Phuket

Finding The Best Apartment In Sathorn For You &…